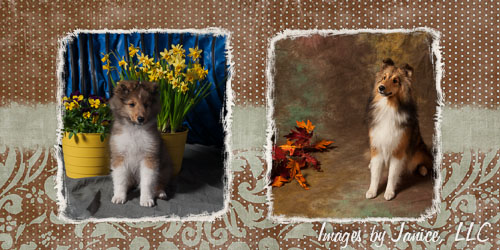 Wow!  This Fall season has been great.  I was privileged to be the portrait photographer at Flying Feet Agility’s CPE trial again in October.  We were first there for their Spring trial in April and met some wonderful people and their dogs.  The theme for Fall portraits was the harvest season.  We had fallen leaves, pumpkins and even a scarecrow.

My first client of the weekend was Legend, a Shetland Sheepdog, owned by Lydia and Kristie Robbins.  I first met Legend in April when he was a wee little pup.  It was fun to see how much he has grown in the six months since them.

It seemed there were a LOT of Shelties in attendance.  They do make great agility dogs, so I guess it wasn’t too surprising to see so many.

We were honored to photograph Audi, the Golden-doodle, again.  This time his little brother Rudi, the Havanese, joined us as well.  They were definitely ready to be photographed.

But sometimes brothers don’t get along….

Below is a tight head shot of Jeter the German Shepherd Dog.

It was a fun three days and I hope we can do it again next year.  Some of the dogs were still full of energy at the end of the weekend like Ever…..

… and others were just worn out.

That’s all for now!