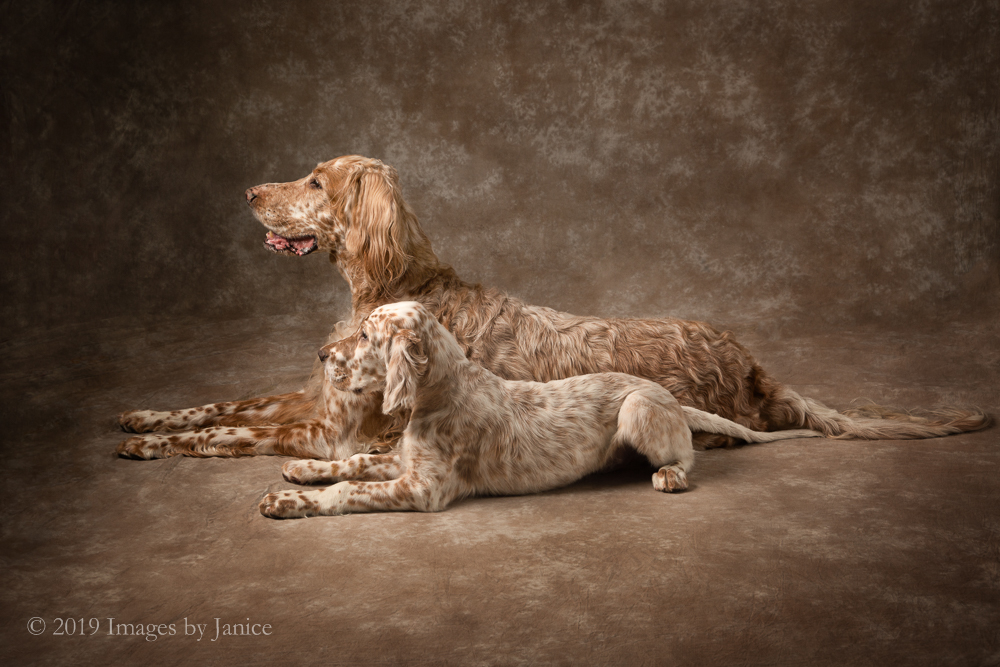 Disclaimer: This is a repost of a previously published blog post. The previous post was lost during a site migration.

I recently had the pleasure of hosting 2 gorgeous English Setters, Rhys and Pascal for a pet portrait session in my studio. I wanted to share a little about them along with some portraits from their studio session. Their owner, Erin, was kind enough to share all about her 2 special boys. So, in her own words….

Rhys, 9 years old in his portrait, is from Jane R. (Ravenwood) here in Louisville, Kentucky. He is our first English Setter. We bought him simply intending to have a pet. I’ve always loved training, though, and he was a busy puppy, so we took him to any class we could find just to give us both something to do. One of our obedience trainers later offered a tracking class, so we gave it a try. Then came agility. Then rally. We had fun doing all of it. I loved watching him learn new skills, but because of his early diagnosis of inflammatory bowel disease, I never thought he would be healthy and stable enough to do anything more than play in training classes.

By the time he was three, Rhys’ IBD was controlled enough that I decided maybe we could actually show. From there, things took off. We have since completed over two dozen titles together (and counting!). We have traveled to ten different states and made more new friends than I could begin to count. I never imagined the journey that this sweet, silly, speckled beastie would take me on!

Next up: Esthete Under Pressure, aka “Pascal”

Pascal, 12 weeks in his portraits, is from Jill W. (Esthete) in New Mexico. We searched for nearly five years for just the right puppy to be my next companion and partner. I knew I wanted another English Setter. (You can’t beat them on sweetness and expressiveness. Plus, they are drop-dead gorgeous.) I needed it to be a bench-bred dog rather than a field-bred dog to get the structure to physically stand up to years of competition in obedience and agility. Bench dogs are what we call “soft”, though, meaning they often don’t stand up well under pressure or in stressful situations (something Rhys and I still struggle with). For those reasons, I really wanted both parents to be proven performance dogs – something that is fairly uncommon (but growing) in our breed.

I have known Jill – another lover of versatile English Setters – for several years. A year ago at our National Specialty agility trial. she mentioned potentially breeding, one last time, her “Allegra” (GCH CH Esquire ‘N’ Esthete’s Rock You! CD BN RA JH OAP OJP OFP CGC TKN) to “Shakespeare” (GCHG CH Esthete’s The Bard Of Avon BN RE SH NA NAJ NF CGC TKA). I was immediately interested. In addition to both parents being Grand Champions, they were also successful in a number of other sports, from agility to obedience and rally to hunting. When the litter was born, they were exposed to a number of different experiences with the Puppy Culture system. This helped build their confidence, intelligence, and ability to work through stress. These were going to be rock star puppies!

We can definitely see the impact Paz’s breeding and rearing has had! He is bold, outgoing, confident, and resilient – just like I wanted. At the English Setter National Specialty last fall, our first foray into the conformation world, he marched right into the building like he owned the place. The noise of the dryers, the barking, and all the dogs and people running around didn’t bother him at all. His confidence helped us to take Best of Opposite Sex in the 4-6 Month Beginner Puppy class. I am so excited about our future together and all the new experience we will have!

Dog Photos – Made into Artwork